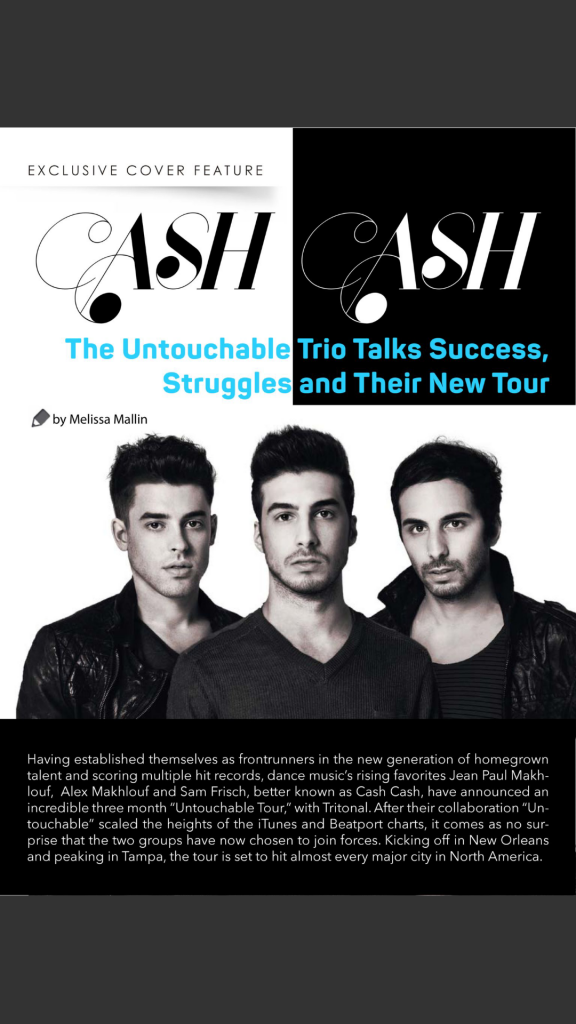 Posted at 15:52h in Magazine by Denice 0 Comments
0 Likes
Share

Having established themselves as frontrunners in the new generation of homegrown talent and scoring multiple hit records, dance music’s rising favorites Jean Paul Makhlouf, Alex Makhlouf and Sam Frisch, better known as Cash Cash, have announced an incredible three month “Untouchable Tour,” with Tritonal. After their collaboration “Untouchable” scaled the heights of the iTunes and Beatport charts, it comes as no surprise that the two groups have now chosen to join forces. Kicking off in New Orleans and peaking in Tampa, the tour is set to hit almost every major city in North America.

Can you give us a brief background and overview of who you are and how you got into music?

We’re a producer/DJ trio from New Jersey made up of two brothers and a best friend. Sam and I (Jean) have known each other since elementary school. We started playing instruments around third grade and we started recording on our PC’s in Jr. high. We started by just messing around, plugging mixers into the 1/8 inch jack of our janky PC’s (laughs). As time went on, we saved up our money to buy different pieces of equipment in order to expand our studio. Eventually, after years and years of just experimenting with different things via trial and error, we started getting the music to sound the way we wanted it to. We began remixing and producing for other artists, which eventually influenced the sound of our original music.

You started out as three suburban kids in New Jersey, just making music in your home studio. Can you describe how you felt and what the journey has been like from where you started to where you are now?

It’s been truly amazing! The feeling of hearing 20 thousand kids singing back your songs, even on the other side of the world, is a feeling I can’t put a price on. It never gets old and it hits me hard every time, sending goosebumps down my spine.

It’s been a long journey, though. A lot of artists hit it their first time and have overnight success, but that wasn’t the case for us. We’ve been at it for a long time and hit a lot of speed bumps along the way, but we stuck with it and we never gave up. The mindset was just, “music is what we’re meant to make and we won’t take no for an answer!” Half the groups out there would have called it a quits after hitting some of the bumps we did, but we knew that we could make it happen.

That being said, we set reasonable, responsible goals that we’d constantly keep reaching. The fact that we didn’t have overnight success made us really appreciate every little thing that’s happened. Not a day goes by that we aren’t grateful to be doing what we love for a living.

Tell us more about the “Untouchable” Tour with Tritonal?

We’ve been wanting to do a full U.S. run like the “Untouchable Tour” for quite some time. Clubs and festivals are amazing, but it’s always fun to go city by city, night after night, in a bus hitting all the places we don’t normally get to play when we’re on a fly out schedule. That being said, we’re thrilled to embark on this journey with our good friends Tritonal. Our styles fit together really well and doing a song and tour together makes perfect sense. Mark your calendars and come get wild with us!

What struggles have you endured and how have you overcome them?

Most of our struggles come internally. We’re constantly over-critiquing our music and sometimes, it gets a bit out of control. We’re also not afraid to say things to each other like “yo, that fucking blows,” or “dude, are you deaf? That sounds like shit!” Needless to say, things can get pretty heated (laughs). Alex and I are brothers so, we obviously go at it pretty hard sometimes.

I could sit here and lie and say it’s all fun and giggles, but it’s not. Sometimes, things get physical, sometimes things get broken and the walls get a hole or two, but I firmly believe it’s that dynamic that pushes us creatively to do more. We have been making music for over 10 years now and we know how to work with each other to maximize each member’s skills and potential. We have the perfect balance of family and business. If it hasn’t broken us up by now then I’m 110 percent positive it never will.

What advice would you give to other artists trying to get their music out there?

Have faith and trust the system. I’m a firm believer that the cream always rises. For years, I wondered, “how do we get noticed or how do we get discovered?”  Eventually, things started to work in our favor, the better the music got and the more we hustled as a group. At the end of the day, if you make the best music you believe you can truly make and you do everything in your capacity to get it out there, but it still doesn’t rise…then you might not be making cream and  should reassess your product.

I won’t sit here and give people false hope with the bullshit Disney line, “you can do anything you put your mind to.” There’s no nice way to put it.There are a lot of people out there putting their heart and soul into it, but just don’t have what it takes and never will. It’s not my place to say that to someone, but to make them aware of that scenario.You have to be patient, but not too patient because it could ruin your life. Passion is one thing, but you should set a limit as to when you start channeling that passion into a hobby versus a career path. There’s nothing wrong with doing so. It’s not giving up. It’s being responsible.