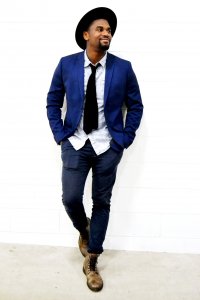 Baltimore has always upheld a unique culture in the arts and performing arts. The likes of Jada Pinkett-Smith, Montel Williams, Tori Amos, and Modern Family star Julie Bowen all rose out of Baltimore. As a raver from the city of Baltimore, I am very familiar with our own branch of house music appropriately named Baltimore club music. Baltimore club has been described as a breakbeat genre of EDM house music based on an 8/4 structure with tempos upwards of 130 BPMs. For a reference, it can be compared to trap, bounce, ghetto house, and ghetto tech. It was created in the 1980s. DJs of my day include Diamond K, Rod Lee, and K Swift, may she RIP. Today, Baltimore club has somewhat faded into the background, with a New Jersey club sound making waves and with the growth of other EDM genres being introduced into the city.

Such EDM sounds can be heard coming from a local Baltimore DJ, FOMO, who is also known by his government as John Mullinix. As a 29-year-old African American DJ, he has taken the EDM opportunities offered to him and run with them. Baltimore club flavors can be heard mixed with his primary love of house, future house, deep house, progressive and even the less known genre fidget. That’s how DJ FOMO caught my ear. I heard him playing at Soundcheck in Washington, DC, as he closed the set for house DJ Viceroy.

“I like tracks with big sexy piano progressions, a sultry vocal, and a good drum beat.” -FOMO

FOMO is a self-taught DJ, producer, and songwriter, and he also taught himself how to play the keyboard. He has a Bachelor’s in Marketing and Psychology from American International College. FOMO can be spotted playing at many of the nightclubs in DC or Maryland, but also at locations throughout the United States including New York, Florida, California, New Jersey, Texas, Pennsylvania, and Virginia. He is influenced by MK, Green Velvet, Gorgon City, Calvin Harris, Disclosure, Shadow Child and Blonde; “I like tracks with big sexy piano progressions, a sultry vocal, and a good drum beat,” says FOMO of the music he rocks with. When he is not DJing he can be found rock-climbing, longboarding, skimboarding, traveling and attending live music shows. 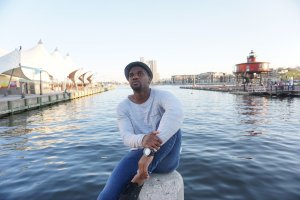 With the support of his girlfriend and advising friend Matthew Medney, FOMO’s future is looking bright. Currently, FOMO and his label partner Kris Ware, are working on his solo project FOMO with a single to be released October 28th. In conjunction with his single, he is hosting a video release party. All this excitement has FOMO riding high as he also signed a deal with his label, Warpaint Records, and the newly merged Sony RED/The Orchard. Here’s a little bit behind the man from Baltimore, his deal with Sony, and his future endeavors.

Why did you become a DJ and how long have you been doing this for?

In 2011 a promoter hit me up on SoundCloud about playing a show for him. I was in a duo at the time and had been producing electronic dance music sometime but never really thought about DJing until then. We didn’t want to turn down the gig so we decided to learn how to DJ.

What shows have you performed at this year?

This year I’ve had a few notable show’s, among those I would say SXSW [Conference and Festivals in Austin Texas] where I played with KJ Sawka of Pendulum, Soundcheck in DC and Union in LA for a Warpaint Records showcase.

You opened and closed for Viceroy. Tell me how you came across that awesome experience and what it was like being behind the turntables that night?

DJing is a natural high for me. I get a kick out of getting to blast some of my favorite tunes for people and curating the dancefloor. It’s also an amazing feeling when I drop my own tracks I worked on for hours on end alone in my studio and watching the impact they have on people live. It makes the countless hours all worth it.

I came across the opportunity through a friend. The event production company Glow had been on my radar for a while as they are the premier EDM promoters in the DC, MD, and VA area. I reached out to him and asked if he knew anyone in the Glow family.

He introduced me to a promoter for Glow, [who after he] heard my music he became a fan and supporter and introduced my music and brand to his boss Zoe Barton and Vahid Esmaeilian, the Promotions Director who listened to my mix and decided to give me a shot. It was quite a few doors but it happened and I’m thankful to them and the Glow family. 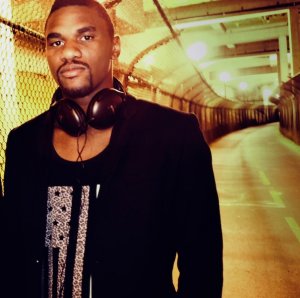 Do you feel there are barriers to being a male minority in an industry? If so, tell us your perspective and how you manage to overcome those barriers.

Well honestly on the business side, yes, but once you’re on stage no one cares what color your skin is or where you came from, they just want to have a good time and hear you play a great set. Early in my career, I had to combat a lot of stereotypes and preconceived notions because I was black. Many people just assumed I was a hip-hop DJ and some clubs wouldn’t put my face on flyers that they placed other DJs’ faces on because of it.

I even faced some discrimination in the rave scene being called a poser and a fake just because they couldn’t wrap their head around a black electronic music DJ at the time. The irony of it all was I actually grew up on house music and electronic music. My dad would bump Depeche Mode, Nine Inch Nails, and the Chemical Brothers all the time and my mom had all the Baltimore club/house music tapes. She would wear out Green Velvet’s “Time for the Percolator”. I was only 8 when that song was released. House and electronic music have always been a part of my life and long before I learned how to produce it even.

“There’s just not that many of us. We are a minority in every level of the business: producers, managers, booking agents or promoters. I really look up to other African American DJs/producers. It’s inspiring and just shows me no matter what barriers might be before you, it can be done… if they can do it, so can I.” -FOMO

Besides DJing, you have an EDM label, Warpaint, which you just signed a distribution deal with Sony RED/The Orchard. What goals do you see for your label and how is signing this deal going to help you achieve your goals?

Yes, I do, thanks for mentioning it. We recently inked a deal with Sony RED/The Orchard for worldwide digital and physical distribution. We are looking to break our core artists into the mainstream and festival circuits while providing a platform for young talented artists to develop and grow.

We would also like to be a beacon for creativity. It’s not insider knowledge to know many labels are resistant to new sounds and smaller artists. We want to give those innovative artists a chance to truly express themselves and break through the noise of saturation in the industry.

Signing with Sony Red/The Orchard will help us reach people on a greater scale and gives us connections that we would be hard-pressed to receive this early in our life as a label. Not only did we inherit the expertise and human resources of Sony but we also gained their wisdom.

What’s next for you on your 5-year plan to succeed?

I’m working on getting more tracks out and really spreading my sound and brand. I’m currently working on building a strong worldwide fan base and meeting as many people as I can. I would like to break a song on the Top 100 Billboard Dance Charts and get invited to play some choice festivals around the world. I would also like to release a few records on other labels as well as collaborate with some of my idols. Kris and I have been working on the brand FOMO and are slowly and strategically pushing it out to the masses. 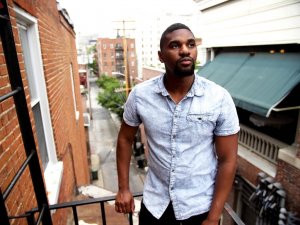 What type of artist are you searching for to complement your label and if someone out there believes their music is fire, how can they get in contact with you?

Right now we are actually looking for house and trap artists. If they think they really have what it takes they can email me directly at [email protected]. Although, if they want a guaranteed response and feedback, use our premium demo submission on our website: warpaintrecordsoffical.com. We get a lot of demos in our general submission inbox, but through our paid premium submission we check it with priority. We found one of our core guys that way, VENON. Look out for some killer releases from him in the near future!

If you could give any advice to your up and coming peers what would that be?

There are going to be up’s and down’s, heartbreaks and triumphs, days you feel on top of the world and days you feel like you’re in the toilet. You just have to remember it’s part of the journey and the struggle builds character. Stay away from negative people and lock away negative thoughts. Sometimes your biggest enemy is you so be mindful and aware of yourself.

Are you a house or trap DJ/Producer?

Or are you interested in the video premiere of FOMO’s next release?

Well then, check out his information below!!

Artist who want to submit their work to Warpaint Records

Premier of “Missing You” video