Posted at 20:16h in Magazine by Denice 0 Comments
0 Likes
Share 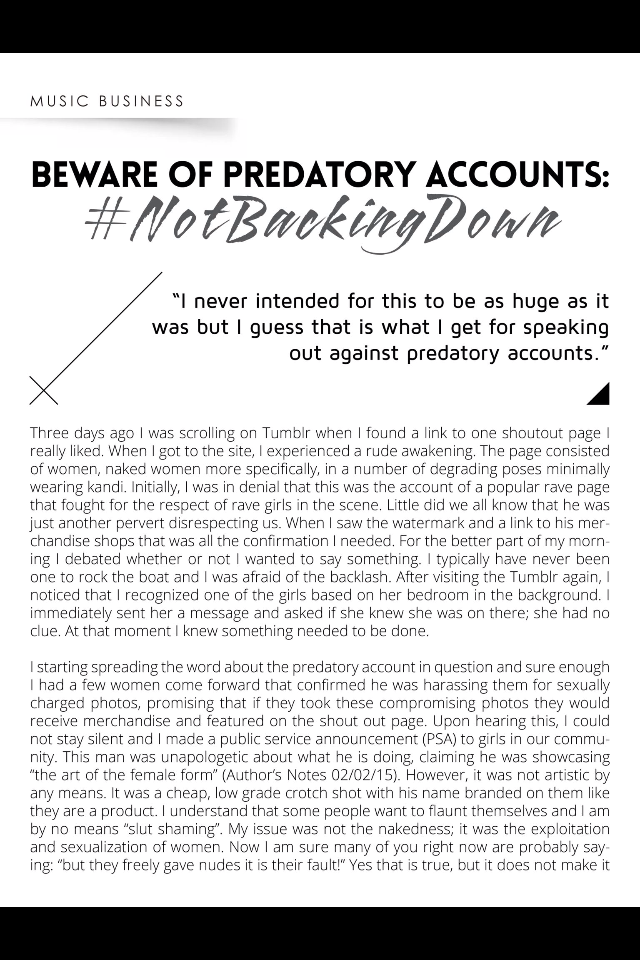 I never intended for this to be as huge as it was but I guess that is what I get for speaking out against predatory accounts.

Three days ago I was scrolling on Tumblr when I found a link to one shoutout page I really liked. When I got to the site, I experienced a rude awakening. The page consisted of women, naked women more specifically, in a number of degrading poses minimally wearing kandi. Initially, I was in denial that this was the account of a popular rave page that fought for the respect of rave girls in the scene. Little did we all know that he was just another pervert disrespecting us. When I saw the watermark and a link to his merchandise shops that was all the confirmation I needed. For the better part of my morning I debated whether or not I wanted to say something. I typically have never been one to rock the boat and I was afraid of the backlash. After visiting the Tumblr again, I noticed that I recognized one of the girls based on her bedroom in the background. I immediately sent her a message and asked if she knew she was on there; she had no clue. At that moment I knew something needed to be done.

I starting spreading the word about the predatory account in question and sure enough I had a few women come forward that confirmed he was harassing them for sexually charged photos, promising that if they took these compromising photos they would receive merchandise and featured on the shout out page. Upon hearing this, I could not stay silent and I made a public service announcement (PSA) to girls in our community. This man was unapologetic about what he is doing, claiming he was showcasing “the art of the female form” (Author’s Notes 02/02/15). However, it was not artistic by any means. It was a cheap, low grade crotch shot with his name branded on them like they are a product. I understand that some people want to flaunt themselves and I am by no means “slut shaming”. My issue was not the nakedness; it was the exploitation and sexualization of women.

Now I am sure many of you right now are probably saying: “but they freely gave nudes it is their fault!” Yes that is true, but it does not make it right and that response cannot be normalized. I will touch on the misogynistic ideology of victim blaming in a little bit but the fact that people are even making that statement only speaks to how severe the gender disparities are. This post was for the girls who were harassed by him, the ones who did not know they were going on Tumblr and the ones that could be minors. I was making this post for them. Females in the community already have a hard time with our self expression through costumes at raves and it is these predatory accounts that are the ones stealing our pictures and making degrading comments behind our backs. For some strange reason, people think that because we dress in less clothing at raves we somehow are “asking for it” when that is not the case. No matter how we dress we are never asking for it. We dress the way we want for ourselves, not for the satisfaction of men. As long as we continue to let these perverts make attempts to exploit us, structural gender violence in the community will continue and that is not ok.

To read the full article on Beware Of Predatory Accounts: #NotBackingDown and to get even more exclusive content check out the magazine now. This article can be found in Issue 9 of EDM World Magazine! Download the app for free. Apple users click for access on your iPhone or iPad. Android users click for access here.