11 Feb Behind the Scenes with Videographer Rory Kramer 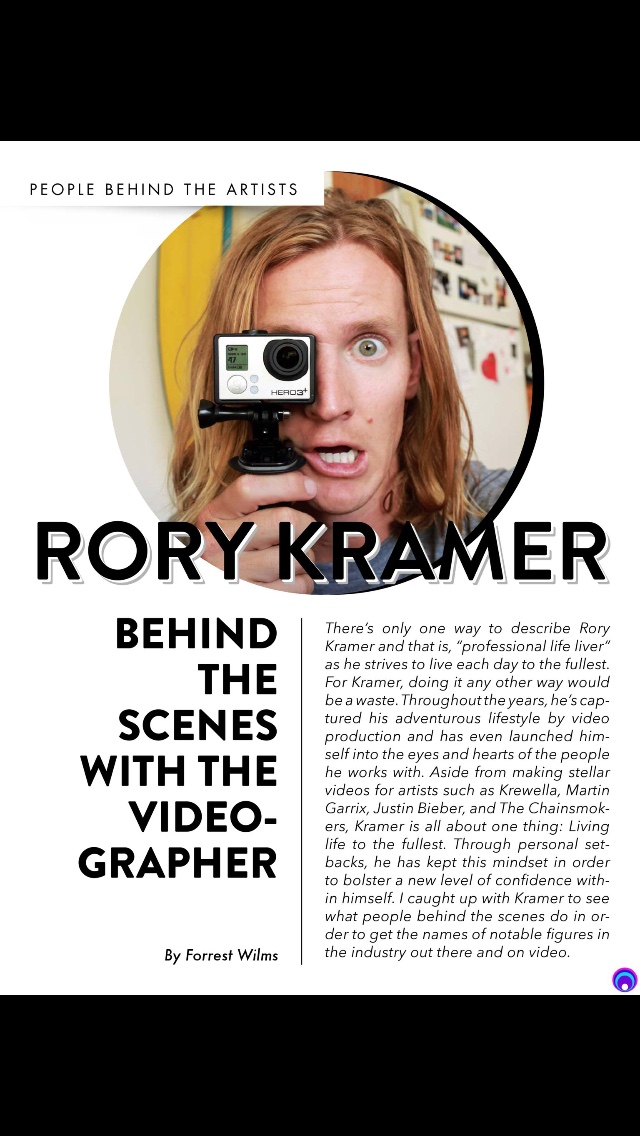 Behind the Scenes with Videographer Rory Kramer
By: Forrest Wilms

There’s only one way to describe Rory Kramer and that is, “professional life liver” as he strives to live each day to the fullest. For Kramer, doing it any other way would be a waste. Throughout the years, he’s captured his adventurous lifestyle by video production and has even launched himself into the eyes and hearts of the people he works with. Aside from making stellar videos for artists such as Krewella, Martin Garrix, Justin Bieber, and The Chainsmokers, Kramer is all about one thing: Living life to the fullest. Through personal setbacks, he has kept this mindset in order to bolster a new level of confidence within himself. I caught up with Kramer to see what people behind the scenes do in order to get the names of notable figures in the industry out there and on video.

How and when did you get started in videography? Did you transition from photography?

My interest in video recording began when I was 15. Me and a friend would film everyday after school.  We’d bring this humongous VHS video camera everywhere.  That was probably back in 1999. I didn’t start taking pictures until later when I was about 29 or 30.

Were you always the “artistic” type?

You know, I was actually blind to the fact I was an artistic type. I never valued anything I did with the arts. I also never considered myself an artist until I was 29.

What made you realize you wanted a career in this field? What decisions led you on this path, which is unordinary for most (as opposed to the corporate 9-5).

Honestly, I didn’t know I wanted this career. I just knew I wanted to be happy. I loved making videos, but I never thought it could be a career. I was actually locked in a 9-5 job for four and a half years before people found my YouTube videos and started asking me to tour with them.

Who was your first big client or what project made you look back and think, “wow?”

All my clients made me think “wow,” because at the time, they were my biggest job. First, i co-shot Krewella’s, “Party Monster” music video. Afterwards, I toured with 3LAU and then with Martin Garrix. Then, I shot one of Avicii’s music videos and then Justin Bieber’s. Every time I did one of those, I thought “wow.”  Even now, when I look back on those videos, I still think, “wow!”

The first time I worked with an artist I was really fond of was Krewella. I was really nervous to work with them. However, working with them showed me how human everyone really is. Today, they’re some of my closest friends. I’m even managed by Nathan Lim, who is one of their managers.

Who was your first big client and what was your initial reaction to him/her? How did you meet and what led to shooting their video?

My biggest client is Justin Bieber. It was actually Martin Garrix’s manager who recommended I work with him. I met Bieber’s team and they loved me. Originally, I was supposed to meet him and it never happened. Three months later, I was at Ultra Music Festival in Miami, shooting for 3LAU, Krewella and Martin Garrix. I was on stage for Skrillex when Bieber came out. I shot his performance and went straight home to edit a video for his team. I sent it to them and in less than 10 minutes, it was on his Instagram.

After that, I shot him at Wango Tango, which was his first full performance in years. He was extremely nice, outgoing and very kind to me.  Afterwards, I started working with him pretty regularly. Now, I even consider him one of my really good friends. He’s been to my house and has even met my family. That’s saying something because a lot of the people I’ve shot for haven’t met my family.

Do you have a specific idea, image, or direction for each artist’s song before you begin production, or do you tailor it to the individual performer?
Typically, I’ll have an idea of what I want for each artist, but I let the moments unfold naturally. I try not to force anything.