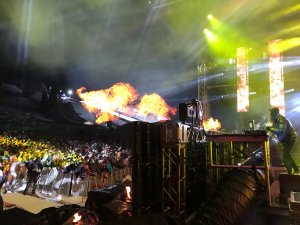 On the Friday night of January 27, 2017, in Aspen, Colorado with the wind chill at -13 degrees, Bassnectar emerged for one hour and fifteen minutes. With the hottest bass around, Lorin Ashton kept the audience jumping around and headbanging the whole time leading them to forget that the temperature in Aspen was indeed in the negatives.

Bassnectar hit the stage to begin his set with his classic remix of Amp Live titled “Hot Right Now.” The title and song was perfect for the cold occasion as it brought heat  in the audience with everyone bouncing around one another. He continued mixing and the crowd was going wild. When he played d-Queue’s “Chicken Dippaz,” the crowd knew that Lorin entranced them and were in for one his noteworthy and special sets.

Dropping beats like crazy, Bassnectar then went on to play “The Matrix.” At this point, the Nectar fan base was losing it as heads were banging incessantly. Continuing on, the “Bass God,” played his fun and bouncy single “Sideways” with Louis Futon, featuring Zion I. With the crowd jumping and forgetting that their feet may be frostbitten, Bassnectar changed the mood and dropped his chill, slow-moving grimey remix of Kid Cudi’s “Day ‘n’ Nite.” This song mellowed the crowd and prepared them for the most epic song choice of the night: “Probable Cause.”

Bassnectar woo-ed the crowd when he played his classic oldie “Probable Cause.” But, he didn’t just play his oldie…he switched it, switched it up with Laika Beatz’s “Owl Eyez.” It definitely stirred up a frenzy among the crowd as the first bass dropped with Beatz’s song. After the mayhem of headbanging and moshing, Bassnectar finished his set with another crowd favorite: his remix of Lafa  Taylor’s “Heaters.” Shortly after, he ended his set with his unreleased track with G Jones titled “Stay in the Underground” alerting his fan base of new tracks coming out soon.

Bassnectar was on top of his game as usual or should I say the X Games that weekend. The sold-out show was nothing short of captivating. The enthralled audience became immersed in the hottest beats dropped by Lorin Ashton, which made the freezing X Games not so freezing at all….