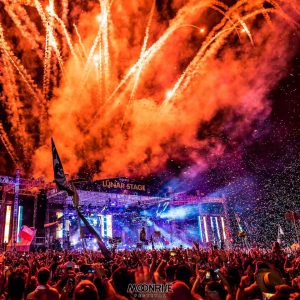 The Moonrise Festival in Baltimore, Maryland held August, 12-13. Its fourth successful year, rocked the infields of the Historic Pimlico Race Course, one week before today’s solar eclipse. This is the first US eclipse in 38 years; view map for eclipse times near you. 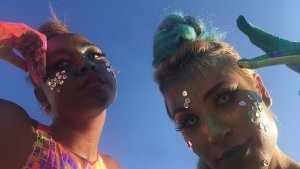 Saturday began with some decent weather until the festival was evacuated at 6:15 pm and reopened at 9:15 pm. Some artists sets were rescheduled including Afrojack, Kaskade, Migos, Big Gigantic, Rezz, Getter, Haywyre and Desert Hearts. Sunday, had not a cloud in sight, the sun was shining hot and bright. Amenities to aid in enjoying the weather included giveaways, water hydration stations, space themed art exhibits, VIP lounge, full-service Medical tents, and RFID wristband for entry/purchases. If the mayhem of large crowds isn’t for you VIP boosted private bars, plush sofas, and bottle service. Moonrise’s VIP package also included a T-shirt, collectors pin, and other surprises.

Moonrise also deployed its Star Team volunteers who committed one day to patrol the crowds for those in need, to provide drinking water, or cooling mist or a quick fanning. In return, Stars enjoy free entry on the second show.

Luna stage night ended with Porter Robinson followed by Pretty Lights, who performed with a live band. DJs that also closed out the night included Dillstradamus, Borgeous and Malaa. Moonrise has ended until next year, but in the meantime enjoy the second Moonrise today. 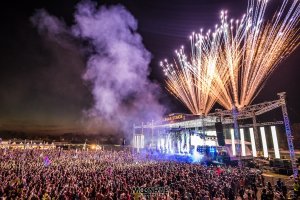