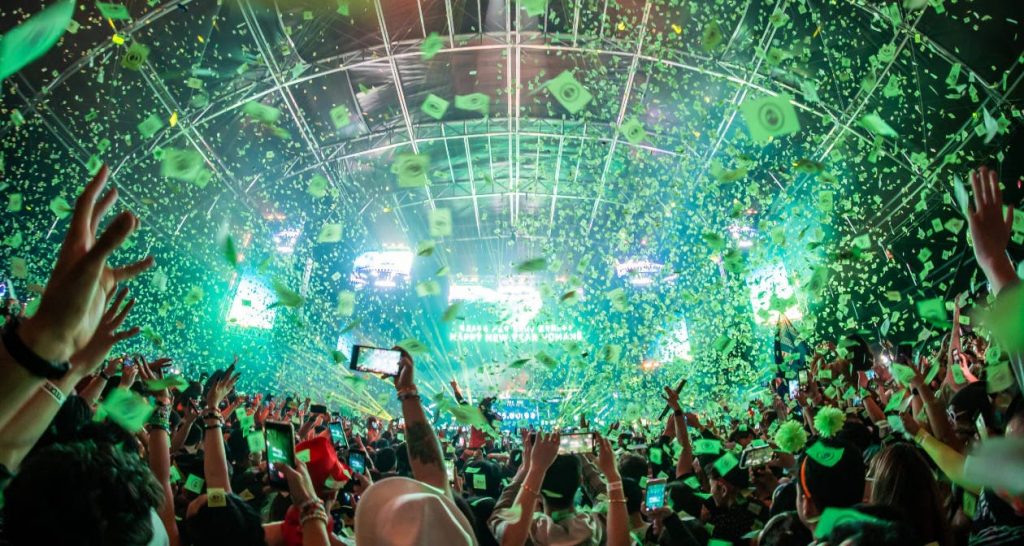 We are back again to count down the top five DJs you need to see at Orlando Invasion. What’s better than spending your New Year’s raving with a bunch of friends? You guessed it, nothing.

Orlando Invasion is a brand new festival brought to us by Pasquella Rotella (CEO) and his team of masterminds behind Insomniac. The prominent EDM company describes the festival on its website. It invites EDM lovers from around the globe to:

“Join us this New Year’s as we probe the deepest mysteries of the cosmos and unlock the secrets of the universe through sonic vibration and movement. Discover a world inhabited by celestial beings and alien technology, where intergalactic frequencies can be detected at every turn. Perhaps we are not alone after all.”

There will be three stages with their own unique features and sounds. You can also expect to see aesthetic aliens and other scenic elements at the venue. In all honesty, the most attractive thing about any festival is its lineup. 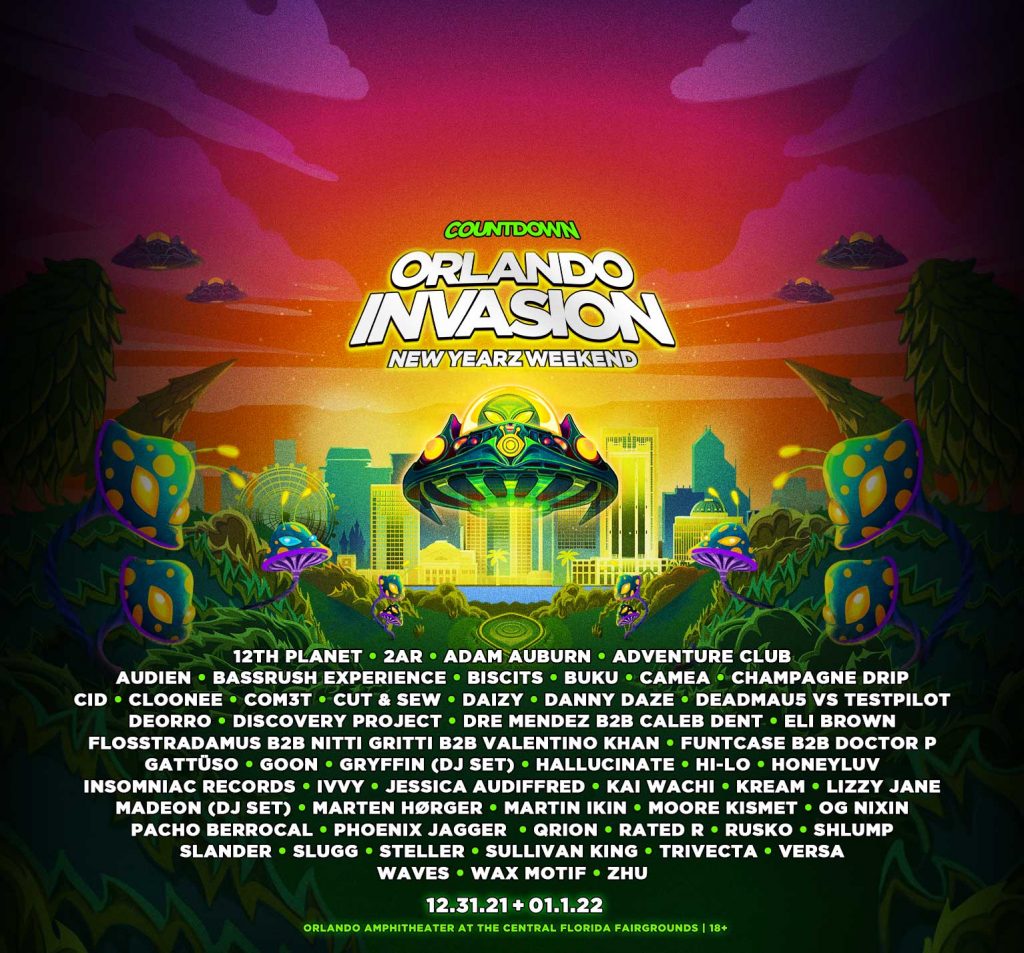 Keep scrolling to see who are top five artists are at the opening premiere of Orlando Invasion. 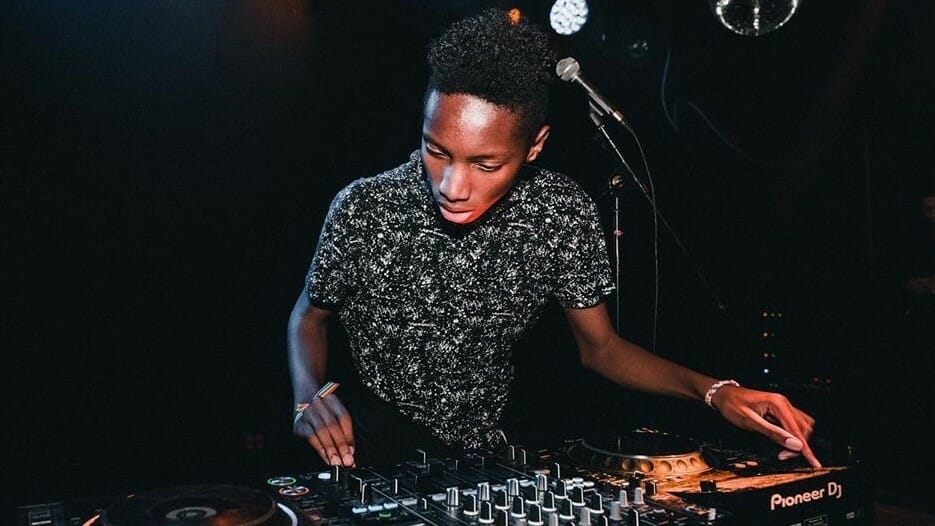 Omar Davis, known by his stage name Moore Kismet, is only 17 but is already making waves in the EDM industry. This gifted teen has a sound so unique that I need to link one of his songs rather than attempt to describe it. It falls into the genres of dubstep, trap, and future bass.

Moore Kismet is on a mission to break the mold and reshape the way we view EDM. His disorderly take on song progression and structure flips the traditional boundaries of pop music. It makes sense this prodigy is the youngest artist ever to perform at Electric Daisy Carnival. Additionally, he has made recent appearances at Red Rocks and Lollapalooza’s Perry Stage this past summer.

With his new track, “Call of the Unicorn”, Moore Kismet continues to turn heads. Do not pass up the opportunity to see him at Orlando Invasion. You might even get a sneak preview of his album Universe, coming in 2022. 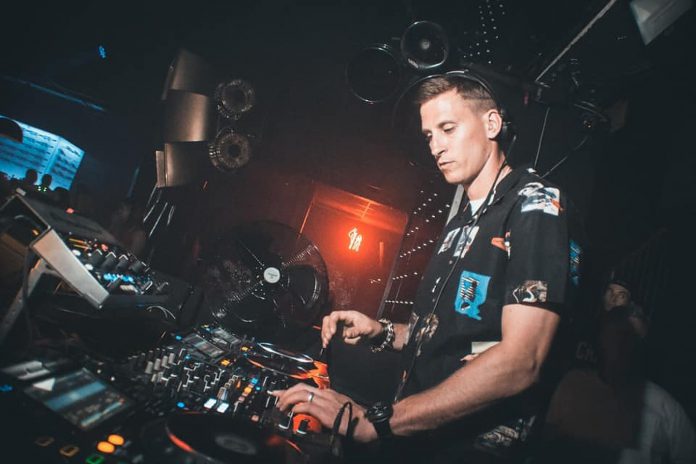 If you are a fan of house, techno, or electronica, then Eli Brown is your guy. Hailing from Bristol in the UK, this producer captures the raw atmospherics of his homeland’s icons, applying them to a blend of the three genres. His distinct sound has allowed him to gain support from the likes of Carl Cox, Adam Beyer, Calvin Harris, and more.

Eli Brown’s fanbase spread exponentially after releasing “XTC” with Solardo. The worldwide smash has received millions of streams and won the 2019 DJ Mag Award for Best Track. Another well-known collaboration is his work with Calvin Harris’s Love Regenerator project.

The dark and subversive sonics does not stop with Eli Brown’s productions. He forged Arcane, a label with the purpose of supporting upcoming talent who embody the brooding, hard-edged house and techno that his work draws inspiration from.

Eli Brown will be making his Orlando Invasion debut at the Area 51 stage on Saturday. Listen to his track below to get yourself in the mood for a killer set! 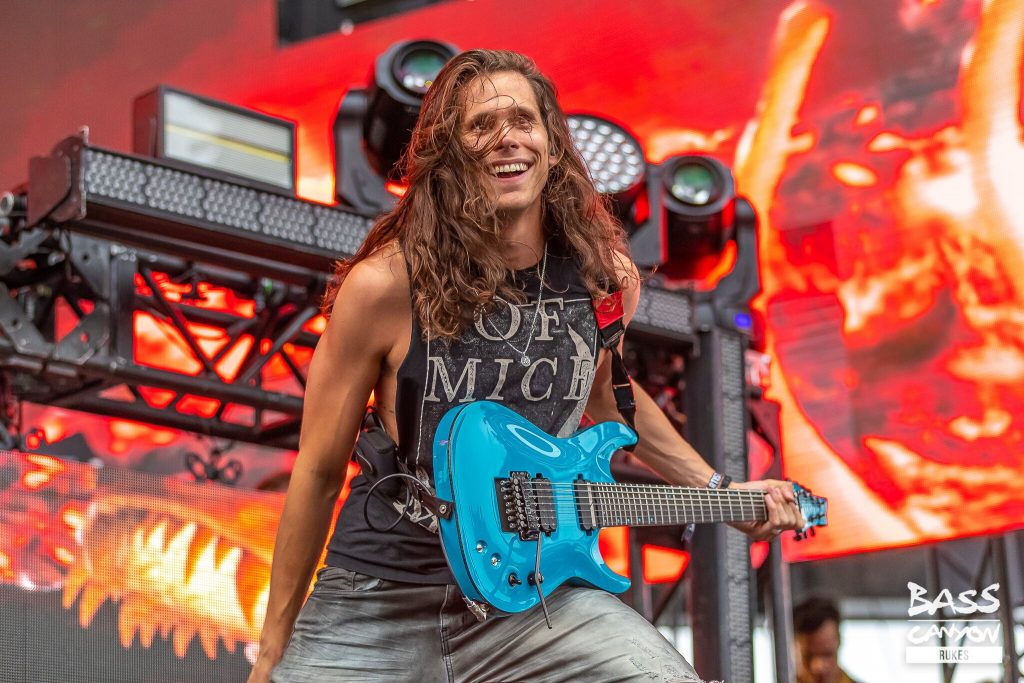 Next on our list is Sullivan King, a rockstar-DJ hybrid. The talented artist Sullivan King creates a musical mosh pit built entirely on rapid-paced, neck-snapping dubstep, intensely shredding guitars and a bold live show that pushes the boundaries of modern music performance.

Launch in early 2014, Keaton Prescott created the Sullivan King project. The project embodies a structure that is one-half metal and one-half bass music. He drew inspiration from Van Halen, along with the progressive rock sounds of post-hardcore and emo/screamo coming from Metallica, Pantera, and the like.

EDM came into play when Sullivan King discovered artists such as Skrillex, Avicii, and Rusko, while hardcore gaming. As Insomniac says, “His original tracks, remixes, and reimagined renditions take the vitality of dance music and run it through the metal machine. The result is a bold, forward-pushing sound that’s equal parts electric and heavy.”

Sullivan King is known for his spectacular reworks of EDM anthems like “Tremor” and “Kick Out the Epic Motherf**cker”, joined by dubstep remixes like his rendition of “Bass Cannon”. You are guaranteed to hear some bass-heavy tracks from his 2021 album, Loud.

This man is truly the epitome of creative genius meets a natural-born musician, with a side of infatuating stage presence. Be prepared for an hour of constant high energy and hard bass drops. 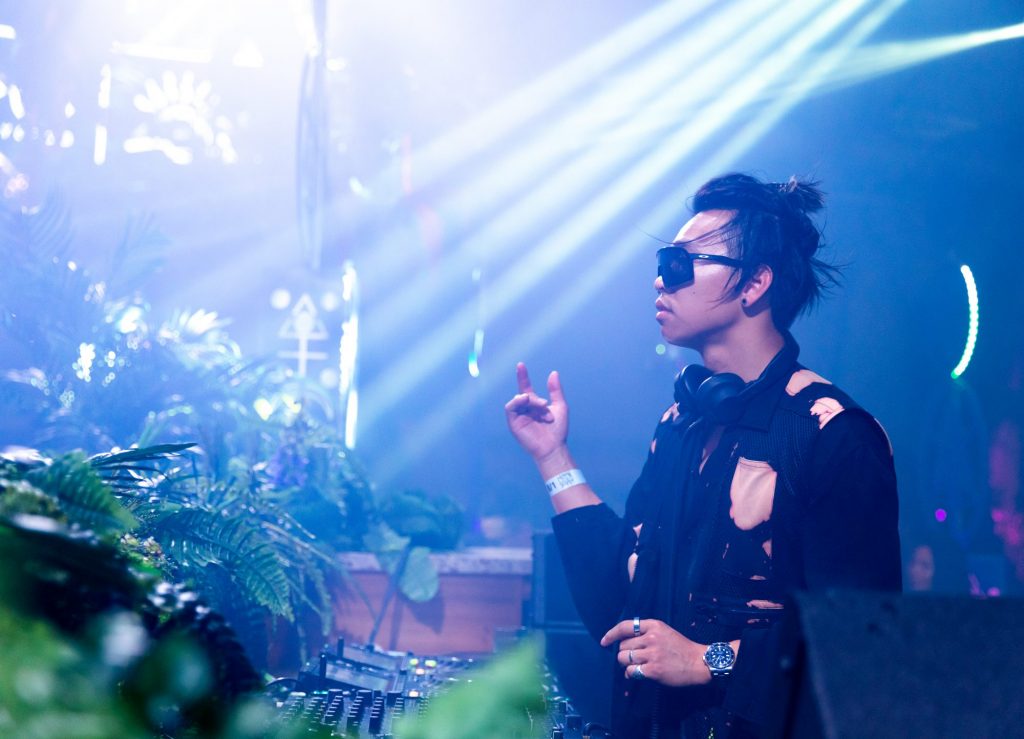 At number three, we have the legendary Zhu as a must-see artist. The artist has recently made a transition to producing music for the future. As seen in his third studio album DREAMLAND 2021, Zhu approaches EDM with a unique twist that requires a balanced c0mbination of instruments and electronic frequencies.

Zhu broke the game when his debut album GENERATIONWHY topped Billboard’s Dance/Electronic albums chart and landed on the Billboard 200. Additionally, he’s had dozens of tracks hit the Hot Dance/Electronic Songs chart. These accolades have earned him partnerships with like-minded brands including Luminosity and Leica.

The outstanding performer has made the saxophone a pivotal instrument in the EDM industry. Watch him perform classics like “Faded” and memorable new tracks such as “Zhudio54”. 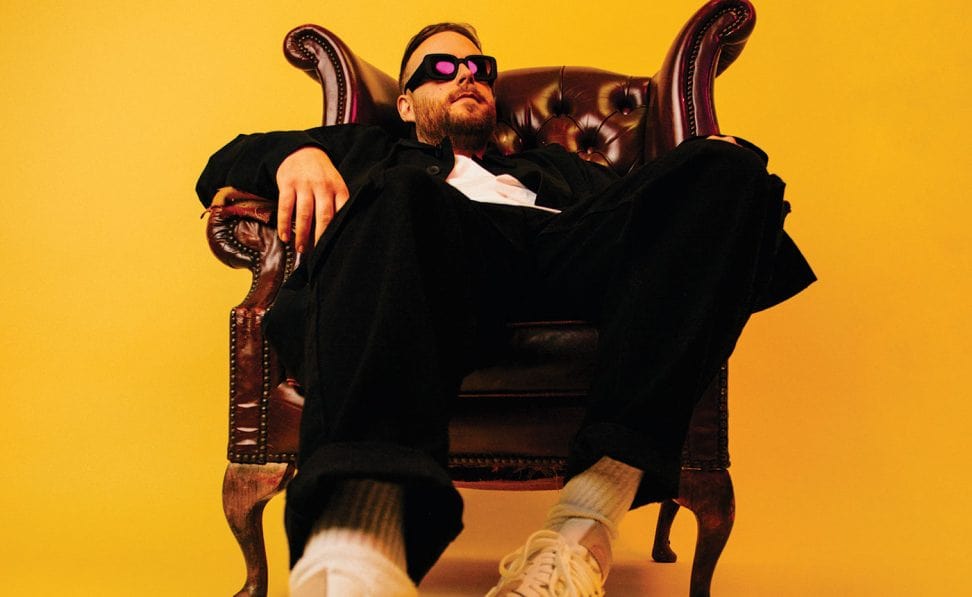 Whether you believe in Biscits’ raw talent or not, reading Insomniac’s profile on him will validate the Southampton-born and bred producer. It states, “Biscits was one of the top 10 selling artists of 2019 on Beatport and is currently receiving over half a million monthly streams across platforms. He’s been releasing via Sweat it Out and Solotoko including collaborations with Solotoko’s head honcho Sonny Fodera.”

Recently, Biscits has been releasing remixes that somehow transform hit tracks into memorable masterpieces. His remix of “Butterflies” by Vintage Culture puts a creative housey spin on the track. He also released a tech house remix of SIDEPIECE’s “Acrobatic” this year. My favorite song of his is the edit of “Last Time” by Becky Hill. The track takes Becky Hill’s soothing lyrics and transitions them into an exciting drop.

On top of his remixes, Biscits has been on a tear when it comes to producing catchy singles. In 2021, he put out “Don’t You Know” as well as “Wait A Minute” for Solotoko’s label. His combination of attention-grabbing vocals and overlapping bass house instrumentals have led to his takeover of the tech house scene. Check out his newly released track, “Your Body”, below. 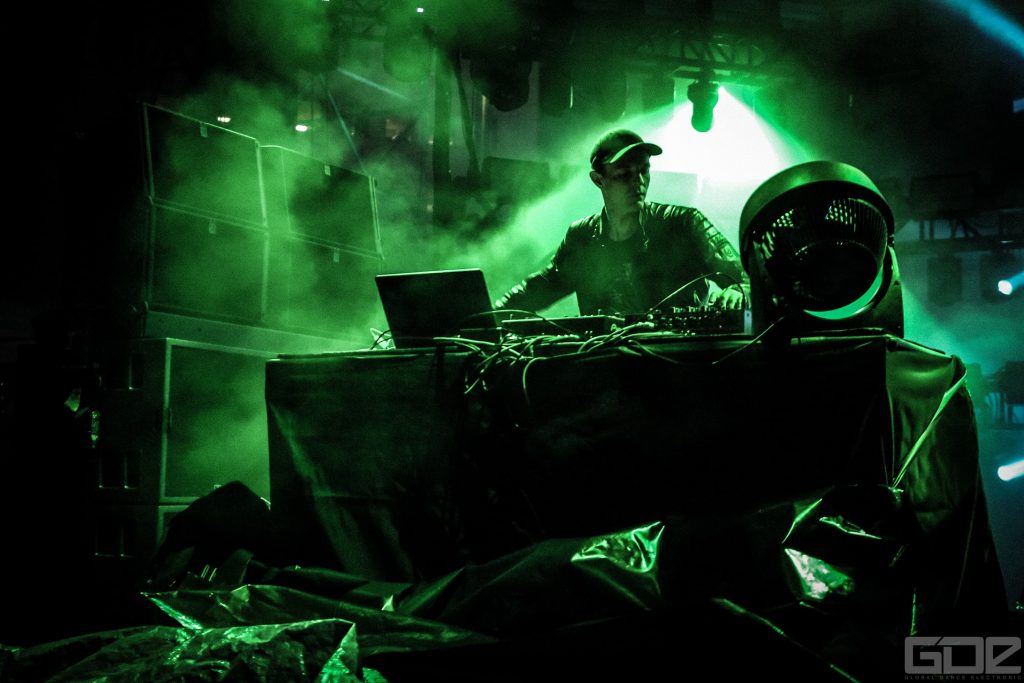 It is no surprise that Deadmau5 and his alter ego Testpilot heads the front of our list. Deadmau5 (Joel Zimmerman) was raised in Canada and has been producing tracks for the EDM scene since 200o. The experienced vet is one of the best in the world at producing beats from scratch.

Having received six Grammy Award nominations for his work, Deadmau5 has collaborated with other revered DJs such as Wolfgang Gartner and Kaskade. In 2007, he founded his own label called Mau5trap; the collective of artists within similar EDM subgenres has boosted its popularity consistently over the years.

To add to the achievement of his own label, Deadmau5 has released countless singles like “Pomegranate” and “Some Chords”, along with nine albums. It is crystal clear why the mask-wearing (a giant mouse head) artist is one of the highest-paid DJs in the world.

Testpilot is Deadmau5’s newest project and alternate identity. Under this persona, he plays mind-blowing techno that is capable of hypnotizing any audience. These two personas will clash during the headlining spot at Orlando Invasion for a can’t miss performance!

Click here to grab your tickets now and join me at the Orlando Invasion.

Are you going to Orlando Invasion? Swipe up to comment below and let me know which artist you are most excited to see!